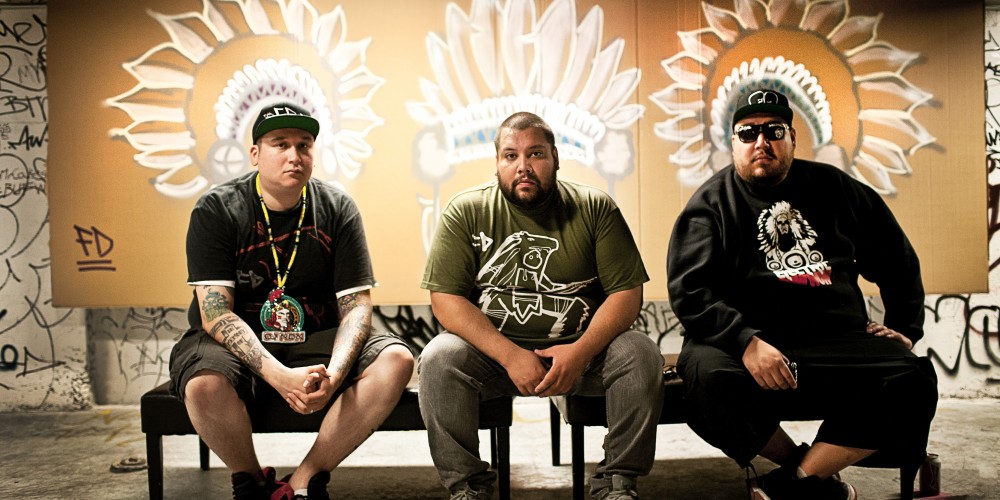 HP: If you and your partners could address all those who attend in headdresses in one statement, what would you say?

ATCR: “Please stop. It’s disrespectful and we really don’t appreciate it.” That’s about all we can say at the moment. We’re in the middle of our civil rights movement right now, today. So hopefully, in a couple decades, “redface” and terms like “Redskin” and “Indian” will go way of “blackface”, and terms like “nigger” and become tabooed in North American society.  http://www.huffingtonpost.ca/2013/07/12/a-tribe-called-red-redface-indian-costumes_n_3576884.html

If you are especially worried by the enormous rash of teen suicide in our community over the last 18 months then please take note.

Bullying by peers and society because one does not fit in to social norms. Because diversity is not openly embraced is a direct cause of teen suicide. Loneliness, public shame and devaluation is a national and local issue and a clear target for resolving hate, and abuse that leads to violence and suicide.

Please be part of the revolution to resolution of this awful problem. There is a PFLAG, Meeting every third Thursday at the Gardenia Center in Sandpoint. PFLAG is a great way to start sharing and promoting diversity.

This is a nationwide problem and there are PFLAG organizations in communities across our country and in Canada and other countries around the world. 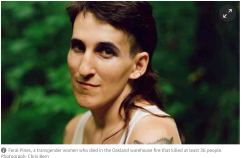 “Trans women are always having to hold each other in grief.”

I feel the tragic loss of the three young trans women in the Oakland “Ghost Ship”, warehouse fire. All the young artistic lives lost there is terribly tragic, it makes me sick because I know how hard it is to be a self supporting young artist in this country and it’s just damn hard to be young and inheriting a dying planet covered in heartless uncaring people. But our girls? Those who have to be especially brave and work so incredibly hard to find community and their voices, despite already being in constant risk of self destruction and societal violence, when they lose their lives because our entire society continually undervalues the unconventional, the artists, the underdogs, the poor and the disenfranchised so much so that those individuals have to endure such extraordinary risks just to find self expression and love, it is almost beyond my ability to cope and perceive hope.

I was more than sad today to find on Saturday morning that a young underground artist collective in Oakland burned down last night, and already 30 of these young people have been found dead.

Being an artist makes you sensitive to everything, some things are itchy and achy and other things feel more like screaming unbearable pain.

I didn’t know it was an underground art collective that burned up. I saw the headline this morning and choose to pass it because I just can’t bear all the suffering. I assumed it was desperate poor people. Maybe illegal aliens being held there. It clearly stunk of hate, and this new “neighborly retribution” that is stunning our country’s citizenry, or at least those people of thought and dignity, but it never occurred to me it was artists. Young artists.

And then I got a text from my daughter in Washington State, who has many friends and compatriots that live in Oakland, because it’s cheap and they can find space to live and share their tender young outsider-ship there.

She told me that art street kids lived there and managed it. It was just full of art and crafts and they put on music and art shows and found companionship and a way to share in a “safe” community together. I’m totally sickened. It is beyond sad it is unbearable.

My daughter said “I didn’t know anyone, it’s just a really terrible time for artists to die.” What a true statement that is, in all its honest and raw youthfulness.

I agree with her. I feel like even though I didn’t know them personally, I knew them all. The angst I feel is unbearable. I’m not sure I can handle the tidal wave of grief that is consuming the world and has hit our shores in a way I never thought was possible.

Yesterday a young FB friend who lives in Oakland, GracieCT, was given a great honor of recognition for her contribution to the youthful art revolution by Reed Magazine and today, after searching less than 80% of the building, 30+ revolutionary young artists have died in a pyre right in the same neighborhood.

I’m am sick with grief.

All I can say is God speed to their delicate souls that we couldn’t hold here on earth with us. And do “stuff” in their honor, anything. Share this post and the one I shared below it, make art, write, take action, spread tolerance and unconditional love. Keep the torch burning to make their short lives worth the journey they took, and the effort they made. Somehow, do what you can to make their vision, and their pain, worth it.

Newspeak is for Conservatives

It frustrates me when people who are wanting to act against the backward social movement that we just received post election get all tied up in semantics trying to describe who they align themselves with. All these semantics are just tying us up. And it’s a game we need to stay out of and rise above in order to move forward with whatever resources and action we can muster to do so.
Progressive means, as a verb going forward incrementally step by step and describes, as a noun, a person who does that. Liberal means open to new ideas and change as a verb and a person who is that way as a noun. It’s very Orwellian to change the meanings of words and redefine them “politically”. I wish people would read Animal Farm instead of 1984. The pigs in the book animal farm redefining the word equal to mean better. Something like “All pigs are equal but some pigs are more equal than other pigs.” Equal is better than unequal as a concept but as a word by itself it can be hijacked to mean better.
When we as progressive liberals succumb to this need to herd into a corral with the correct scent and then try to give it a label we come up with stupid weak shit. For instance the ridiculously lame label “pro choice” to define the opposite of “pro life”. As if giving a woman a right to choose what to do with her own body and her own life isn’t pro life. Don’t help them, those anti-progressive people, get away with dividing us by changing words such liberal to mean a ridiculously large serving of mash potatoes with gravy at a Thanks Giving dinner, rather than a willingness to be generous to others at some potential cost to ourselves.
And don’t let those among us (the Bernie diehards) steal the word progressive and redefine it as a naive idealism similar to thinking a large enough boat can ram through an iceberg which we all dance and play shuffle board. Words are powerful, too powerful to play with.
I believe change in the progress of the human condition must be made incrementally like a bridge so that it holds together for a long time and that everyone of every background, race, color, creed, gender, sexual preference etc. should be allowed to use it rather than a film-flam-sham of a bridge hastily thrown together with toothpicks.
I believe that all people must be responsible for all people and give toward that end, which is defined as civilization, generously and proportionally to what they have taken for themselves.
Call that what you may, that is what I believe and yes I am very angry at all those who didn’t vote, or fantasy voted based on the safety net of their social entitlement and privilege, or voted for Mr. T-Rex because they are greedy, valueless, blind hogs who think that their flesh isn’t bacon.